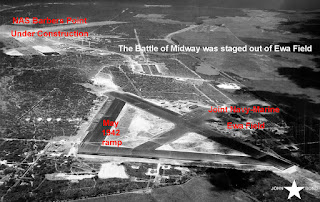 In an important historic review of Ewa Field, MCAS Ewa and Pacific war history- particularly the June 1942 Battle of Midway and other early 1942 Pacific actions, reveals the largely unrecognized operational and supporting role of Ewa Field in 1942. Many naval aviation histories and archives have incorrectly assigned this history to NAS Barbers Point and various early aircraft carrier air group histories based in Hawaii during that period.

The 1941 Ewa Field, approximately 180 acres, was placed on the Hawaii state register in 2015 and on the NPS National Register in 2016. However the period of historic significance was only recognized for December 7, 1941 to December 30, 1941, which was the attack on Pearl Harbor and the subsequent Japanese naval activity around Oahu and on Wake Island, which fell on December 23, 1941.

At that point in time, the very early construction of NAS Barbers Point had begun, which was expected to take about one year to complete. However, with the major threat that the Imperial Japanese Navy presented to Hawaii at that time, a decision was made to direct all money, material and labor forces available from NAS Barbers Point to the adjacent Ewa Field, which had just become fully operational.

Because Ewa Field was already a Navy airfield, designated as a major airship mooring mast (1925 -1940) the January 1941 arrival of Marine Corp aviation was considered as an advance expeditionary force that would move further out into the Pacific (Wake, Midway, etc.) And in fact this was why Ewa Field was minus many planes on December 7, 1941, because air units had been deployed to Wake and Midway. This Marine aircraft movement by the USS Enterprise was in fact the primary reason it was not in Pearl Harbor on December 7, 1941. That and a subsequent Pacific storm that both delayed the Enterprise arrival to Pearl Harbor by a matter of hours as well as helping to mask the large Japanese force approaching Oahu from the northwest.

In the early hectic days of 1942 Ewa Field, located in southwest Oahu suddenly became the Hawaiian Islands main frontline combat airfield. The very rapid expansion of Ewa Field for two Navy carrier groups lead to the Navy largely taking over the base once two major new aircraft parking ramps had been constructed and the runway lengthened. In fact the Navy began referring to Ewa Field as Naval Air Station Ewa (NAS Ewa). Confusing the historic records, archive documents and photo collections further was also the general assignment of Ewa Field as NAS Barbers Point. Many records still even state that NAS Barbers Point was where 1942 carrier air groups in the Pacific based and flew to the Pacific battles of Coral Sea and Midway. But this was not possible from the still under construction NAS Barbers Point.

Included with this blog letter are links to command histories and air photos that help make the case as to why there needs to be a history review and new analysis. It is also very important right now because a great deal of the early 1942 Ewa Field, later designated Marine Corps Air Station Ewa, still exists in a WW-II condition and largely undeveloped. The area was greatly fortified with anti-aircraft gun batteries, bunkers, concrete aircraft revetments and fuel storage areas.

Historians and researchers began preparing in 2018 a National Register nomination of one of the largely unknown key aspects of the Battle of Midway – the 1942 Ewa Field aircraft revetments where many of the Navy and Marine planes left in late May 1942 to participate in the incredible and now legendary WW-II Pacific battle. Ewa Field was the key supporting airfield where all of the Marine aircraft originated from that participated in the Midway battle, as well as the Navy air groups from USS Hornet, which included Torpedo Squadron 8. We now know other carrier air groups, such as USS Enterprise were also directly connected with Ewa Field. The Pearl Harbor Ford Island Naval Air Station sent to Ewa Field CASU 1 (Carrier Aircraft Service Unit) to maintain the carrier aircraft and which was later spun off as CASU 2.

How and why Ewa Field was largely denied its important historic place as America’s 1942 “Battle for Hawaii” (i.e. Battle of Britain) key frontline combat airfield recognition and and role in the June 1942 Battle of Midway is because of the way base command histories and air group carrier histories were recorded in early 1942. Local Hawaii histories of early 1942 present a picture of great fear and almost panic in the Islands after the December 7, 1941 Japanese air attack. Martial Law was declared, tanks rolled through the streets, sandbag machine gun positions and air raid bunkers were installed everywhere with gas masks required of every citizen, school child and even babies.

Expecting a Japanese invasion, nighttime gunfire and reports of parachute landings were common as many soldiers, Marines and airmen carried loaded weapons everywhere, including to Waikiki Beach. News of Singapore, Hong Kong, the Philippines and Wake Island falling to Japanese military forces spooked everyone in Hawaii. Very early in 1942 the new Pacific commander Admiral Chester Nimitz ordered a complete realignment of PNAB (Pacific Naval Air Base) construction priorities, including a massive expansion of Ewa Field runways, ramp spaces, air defenses and fortifications. Money, manpower and materials intended for a just beginning construction of NAS Barbers Point was all redirected to Ewa Field.

As a local historian that has been fortunate to have had many good sources for military histories, I have spent the past seven years researching newly discovered Ewa Field photos and documents from archives and the largely overlooked role Ewa Field played in post Pearl Harbor, early 1942 wartime history. In what seemed like an impossible goal due to very extensive land developer pressures and politics, the 175-180 acres of former 1941 Navy and Marine Corps Ewa airfield, where US Marines died in battle, was placed on the NPS National Historic register in May, 2016.

Now as there has been continued further historic research into the largely unrecognized 1942 Pacific War history of Ewa Field and its relationship to early key Pacific battles, the still existing 75 concrete "clam shell" aircraft revetments have become a very important visual reminder of why they were constructed for NAS Ewa Field Navy aircraft. Revealing more than we expected were the even earlier and still existing sandbag and concrete gunite revetments where specific Marine Corps Brewster Buffalo planes that flew in the Battle of Midway were parked. As we went through more archives we discovered new historic airbase documents, diagrams and photos connected with the early 1942 planes, pilots and squadrons based at NAS Ewa Field.

Further, we have since found Ewa Field connections with nearly every major combat action in the Pacific, including of course Wake Island, but also the April 1942 Doolittle Raid, May 1942 Battle of Coral Sea, June 1942 Battle of Midway and the 1942-43 Guadalcanal Henderson Field Cactus Air Force which was MCAS Ewa Field’s direct airfield off spring. Once Henderson Field and NAS Barbers Point became operational MCAS Ewa, established in September 1942, became the logistical and training hub for Marine Corp aviation in the Pacific. MCAS Ewa continued to expand greatly to the end of the war and afterwards continued support of the post war China Marines and even provided R5D (Douglas C-54) transport aircraft and pilots for the 1949 Berlin Airlift.

At the successful conclusion of the Cold War the MCAS Ewa air wing command was inactivated and the base went through a base realignment and closure process that ended in 1952 and its absorption into NAS Barbers Point. The Marines transferred aircraft over to the newly recommissioned MCAS Kaneohe which had formerly been NAS Kaneohe. In further musical chairs the Navy's Patrol Wing Two command, which had their PBY's shot to pieces in December 7, 1941, moved to NAS Barbers Point. The former MCAS Ewa Field was in 1958 made Patrol Wing Two's headquarters with construction of a new headquarters building (facility 972) by the old Ewa Field front gate which had been strafed by Zero fighters on December 7, 1941.

The Navy 1960 mission changed from the Pacific Barrier Squadron (AEWBARRONPAC -Airborne Early Warning Barrier Squadron Pacific) flying Lockheed WV-2 (EC-121K) to the new reconnaissance and anti-submarine warfare missions with Lockheed P-3 Orion aircraft. An ASWOC (Anti Submarine Warfare Operations Center) was added to the Patrol Wing Two headquarters facility building 972 and a new SOSUS (Sound Surveillance facility for tracking Soviet submarines) was built next door with two large circular antenna arrays, satellite dish and microwave link to Pearl Harbor. In 1999 Patrol Wing Two moved back to Kaneohe as NAS Barbers Point was closed under congressional BRAC. This is also why MCAS Ewa was forgotten and widely thought of as just NAS Barbers Point. The Cold War had been won and both bases began fading into history.

Most importantly I believe this new review of Pacific War history records is long overdue and especially in light of the fact that many Americans are losing their understanding of the important personal sacrifices that were made in early 1942 when the outcome of the war was not at all certain.

Also many of the very important Pacific War battle sites – Wake Island, Coral Sea, Midway Island, are not easily accessible places for most Americans. 1942 Ewa Field is the closest historic bullet marked and airfield link to these early Pacific battles that are often very different from other later 1943-44 Pacific island invasion battlefields. It was a very different war in early 1942 and Japan could have well advanced further taking Hawaii if the Battle of Midway had seen US Navy carriers sunk instead of four Imperial Japanese carriers.

And many of the lost at sea remains of those who paid the ultimate price in these Pacific sea battles have no dedicated memorial site, such as 1941 Pearl Harbor has, visited by millions every year. In fact surprisingly Ewa Field, Wake Island and Midway Island are not part of the National Park Service World War II Valor in the Pacific National Monument (recently now changed to NPS Pearl Harbor National Memorial.) No other Hawaii location has still existing WW-II runways and revetments like Ewa Field that are as closely historically linked to these incredible early 1942 air battle histories. Most other Oahu battlefield sites are on still active military bases and are far less accessible and visually recognizable as authentic Pacific WW-II era.

"Remembering our solemn commitment to their memory is the promise
that is fulfilled at battlegrounds that are preserved and enshrined by
our nation."

Medal of Honor recipients honored at Ewa Field
Posted by ewafield at 12:59 AM