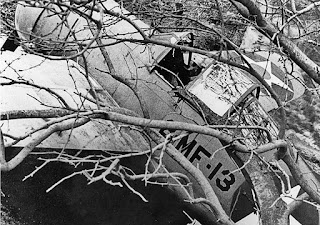 A state review board OKs the nomination, despite objections from a lessee of the site
By William Cole    Nov 29, 2015

The Hawaii Historic Places Review Board has unanimously recommended the placement of about 180 acres of Ewa Field on the National Register of Historic Places — over the objection of the Hunt Development Group, which leases a lot of the land.

The National Park Service, which oversees the register, and the Navy, as the property owner, previously deemed remnants of the old Marine Corps Air Station Ewa eligible for the historic recognition.

The state review board's Nov. 13 recommendation puts Ewa Field one step closer to that listing — and conflicts with Hunt's development plans. The issue also calls into question what is and isn't officially declared to be historic in a state with a lot of unique history.

Historian Ross Stephenson wrote a letter of support for the Ewa Field nomination, pointing out that while some claim there is "nothing there," foundations, runways and artifacts do in fact exist. Buildings have been torn down.

"Note that recently the Honouliuli Internment Camp, just a few miles mauka of Ewa Field, was placed on the National Register," he said. "Honouliuli also consists mostly of foundations. I can see no difference between these two sites in eligibility."

In a letter, Hunt asked the review board to reject or defer the nomination and listing of 180 acres relating to Ewa Field, located in the northeast corner of what later became Barbers Point Naval Air Station.
Steve Colon, president of development for Hunt's Hawaii region, said in an email that "the Navy leased this property to us at full market value. Both the Navy and Hunt believed the area had significant potential for productive use."

The actual National Register designation may come back at about 150 acres by removing, for example, parts of a golf course. About 140 acres of the old airfield are leased by Hunt, Colon said.
As envisioned under the Hawaii Community Development Authority master plan, the area was intended for a variety of projects including renewable energy, light industrial, research and development, and mixed-use residential/retail, Colon said.

"Our understanding is that if the entire area is placed on the register, a significant amount of our property will not be put to a productive use like providing renewable energy," Colon said.

But those development guidelines were considered when few officials even knew the old Ewa Field still existed, obscured by thorny kiawe and other overgrowth at what many assumed was just part of the later Barbers Point air station, which closed in 1999.

Ewa Beach historian John Bond, who discovered what was left of the airfield around 2007, mounted a relentless campaign to bring attention to the Marine Corps history that lay hidden in the weeds.
William Chapman, chairman of the Hawaii Historic Places Review Board, called the site "extraordinary."
"To realize what's there is just breathtaking, really," said Chapman, who walked the site on Veterans Day. He noted strafing marks and an original runway that are "very clearly" visible.
"It's a powerful evocation of the site," he said.

The establishment of Ewa Mooring Mast Field brought a 160-foot mast in 1925 for dirigibles, but two crashes on the mainland led to the cancellation of the program.
The Ewa site later served as the forward Marine Corps airfield in the Hawaiian Islands during World War II. Prior to Dec. 7, it was fully functioning but still under construction, according to a report by GAI Consultants.
The Marines had 48 aircraft at Ewa at the time of the Japanese attacks. Most were SBD Dauntless dive bombers and F4F Wildcat fighters. In the aerial attack that preceded Pearl Harbor by two minutes, nine of 11 Wildcat fighters, 18 of 32 scout bombers, three utility planes, one trainer and two utility planes were eventually lost on the ground as Marines fired back with Springfield rifles and handguns, the report said.
Four Marines were killed, along with two civilians. Thirteen Marines were wounded.

Japanese planes were attacked over Ewa by celebrated U.S. Army pilots George Welch and Kenneth Taylor, who took off from Haleiwa Airfield in P-40 fighters. The GAI report said Ewa Field is the only major battle site from the Japanese attack on Oahu not listed on the National Register of Historic Places.

A $54,000 American Battlefield Protection Program grant was secured by Ewa Beach resident Valerie Van der Veer for the GAI study of the Ewa Plain Battlefield. It is that report the state will submit back to the Navy and National Register of Historic Places for final approval, officials said.

At the Nov. 13 meeting, attorney Sarah Love, representing Hunt, told the state historic review board the nomination "goes beyond what should be included under law," adding, "It includes areas that we believe don't retain sufficient amount of integrity."

Love also noted that Ewa Field is the first National Register "battlefield" nomination in Hawaii, with other bases — Hickam, Kaneohe and Pearl Harbor included — not included as battlefields.

"The entire island was a part of that day (Dec. 7), so I think that this is going to have implications," she said.

Identified in official 2012 report, Navy says it was a "mistake"

The MCAS Ewa Squadron Wall was identified in the 2011 Ewa Battlefield Report by Mason Architects. There was a color photo of the wall and it was listed as having been constructed in 1943.

Shortly before the first Ewa Battlefield Section 106 meeting began in Kalaeloa Hunt Corp ordered the local landmark knocked down overnight with all of the evidence of it being there removed.

There was no notice or discussion with the community at all. The Navy had promised that all historic structures were protected by State and Federal laws and the Section 106 process would allow the community the opportunity to be notified and consulted.

The local community would eventually learn that the Navy never had any intention of keeping their promises when it came to Hunt Corp, a private Texas family corporation that has major influence over Hawaii politicians, government offices and the employees of the Naval Facilities command based at Pearl Harbor.

It is believed that the squadron wall was built in 1943 primarily as a privacy wall for the nearby combat pilot officers quarters (foundations nearby.)

However squadrons began painting their insignia's on it (since they lived next to it) and the tradition continued during the Navy Cold War era. The Coast Guard was still using it and providing
periodic maintenance after the base closed in 1999.

The issue of knocking down the wall came up numerous times in the Navy-Hunt KREP PV farm Section 106 and the community was told it was just a "mistake" and Hunt shouldn't have done it. The Navy said they would probably rebuild it. But that never happened.

Later the community would learn that the Navy never intended to enforce any protections or covenants for identified cultural and historic sites in Kalaeloa, former Barbers Point. 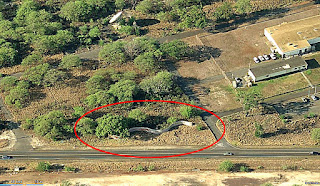 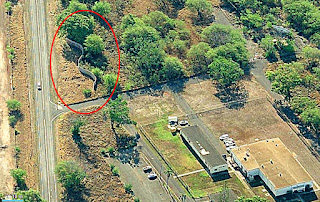 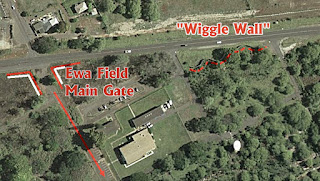 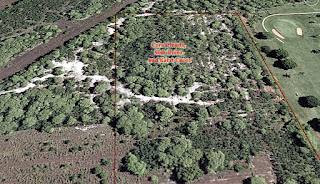 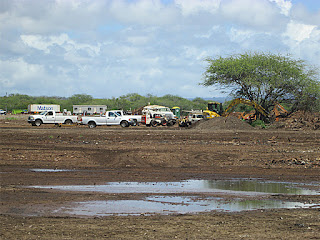 After attending an on site meeting at the Hunt Navy KREP PV site where the contracted Navy archaeologist stated that no vehicles or machinery over Gross Vehicle Weight of 9000 pounds, the Hunt site developer immediately brought in the largest heavy trucks, semi's and metal tracked equipment crushing through the fragile ancient coral karst surface.

Heavy tractor trailer and large metal tracked equipment were used to
clear the KREP PV site despite very clear and specific PA agreement not
to do so. The Navy archaeologist, if ever there at all, never bothered to
enforce the PA and neither did the Navy at Pearl Harbor which had signed the
KREP Programmatic Agreement.

This actually happened again several more times in the area north and west of
the PV construction site, flooding area roads and wasting huge amounts of water
as Hunt Corp moved heavy machinery and very heavy large trucks back and forth.

"Clearing shall be performed with manual labor and small-scale machinery and
light trucks (maximum GVW of 8,500 pounds, as defined by Corporate Average
Fuel Economy standards). Bulldozers and metal-tracked equipment shall not
be used for clearing activities."

Nearly all of the metal tracked machinery was repeatedly brought back and forth
across the 1941 runway on a regular basis from
another base yard area near Coral Sea Road where Hunt Corp tenants are
American Machinery. 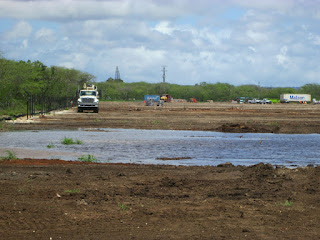 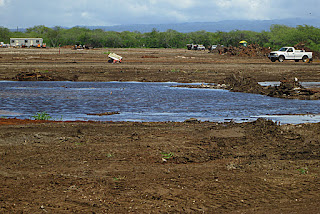 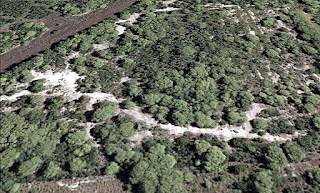 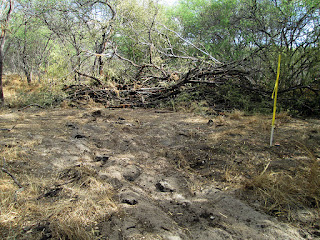 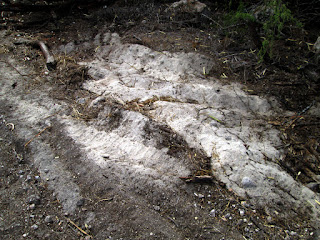 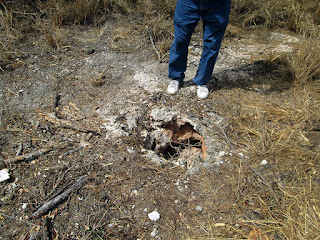 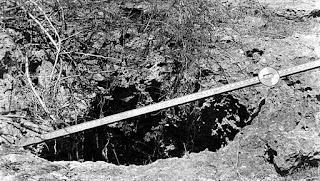 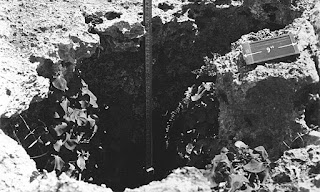 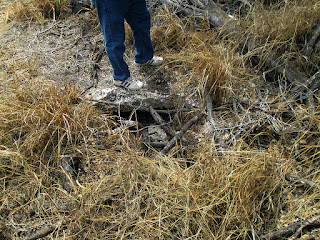 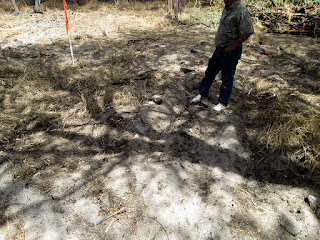 During WW-II construction a large bulldozer fell into a huge underground cave.
Beach sand was poured into the many sinkholes and caves. But eventually it
washes out from decades of rainfall.