by the National Park Service in Washington, DC

URGING PRESERVATION OF UNITED STATES MARINE CORPS AIR STATION EWA
AS A NATIONAL MONUMENT, MUSEUM, AND RESTORED PARK
FOR THE STATE OF HAWAII

The purpose of this concurrent resolution is to urge the President of the United States (U.S.), Secretary of Defense, and Secretary of the Interior to preserve Marine Corps Air Station Ewa, or a portion of it, as a National Monument.

Your Committee has amended this concurrent resolution by:

(1)  Requesting that the U.S. Navy and its private, public and nonprofit partners to proceed with the research, battlefield analysis, and other activities necessary to designate an appropriate boundary within Ewa Field for nomination to the Hawaii State and National Registers of Historic Places;

(2)  Requesting the Department of Land and Natural Resources to report to the 2010 Legislature on these activities;

(3)  Including the U.S. Navy in the list of persons urged to preserve the Marine Corps Air Station Ewa;

(4)  Including the Commander of Navy Region Hawaii in the list of persons who are to receive a certified copy of this concurrent resolution;

(5)  Making other amendments to conform this concurrent resolution to these amendments; and

Respectfully submitted on behalf of the members of the Committee on Economic Revitalization, Business, & Military Affairs

URGING PRESERVATION OF UNITED STATES MARINE CORPS AIR STATION EWA
AS A NATIONAL MONUMENT, MUSEUM, AND RESTORED PARK
FOR THE STATE OF HAWAII 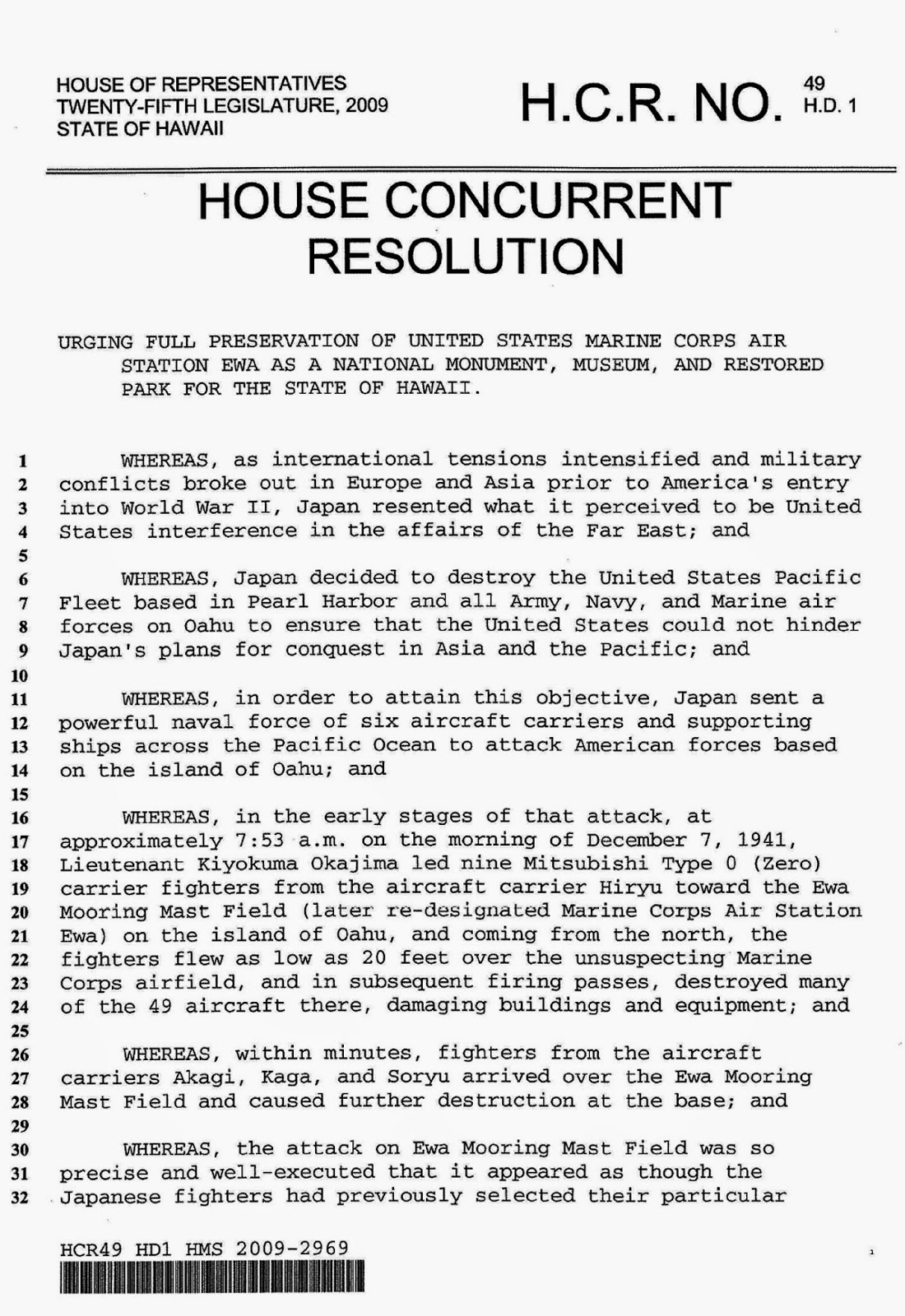 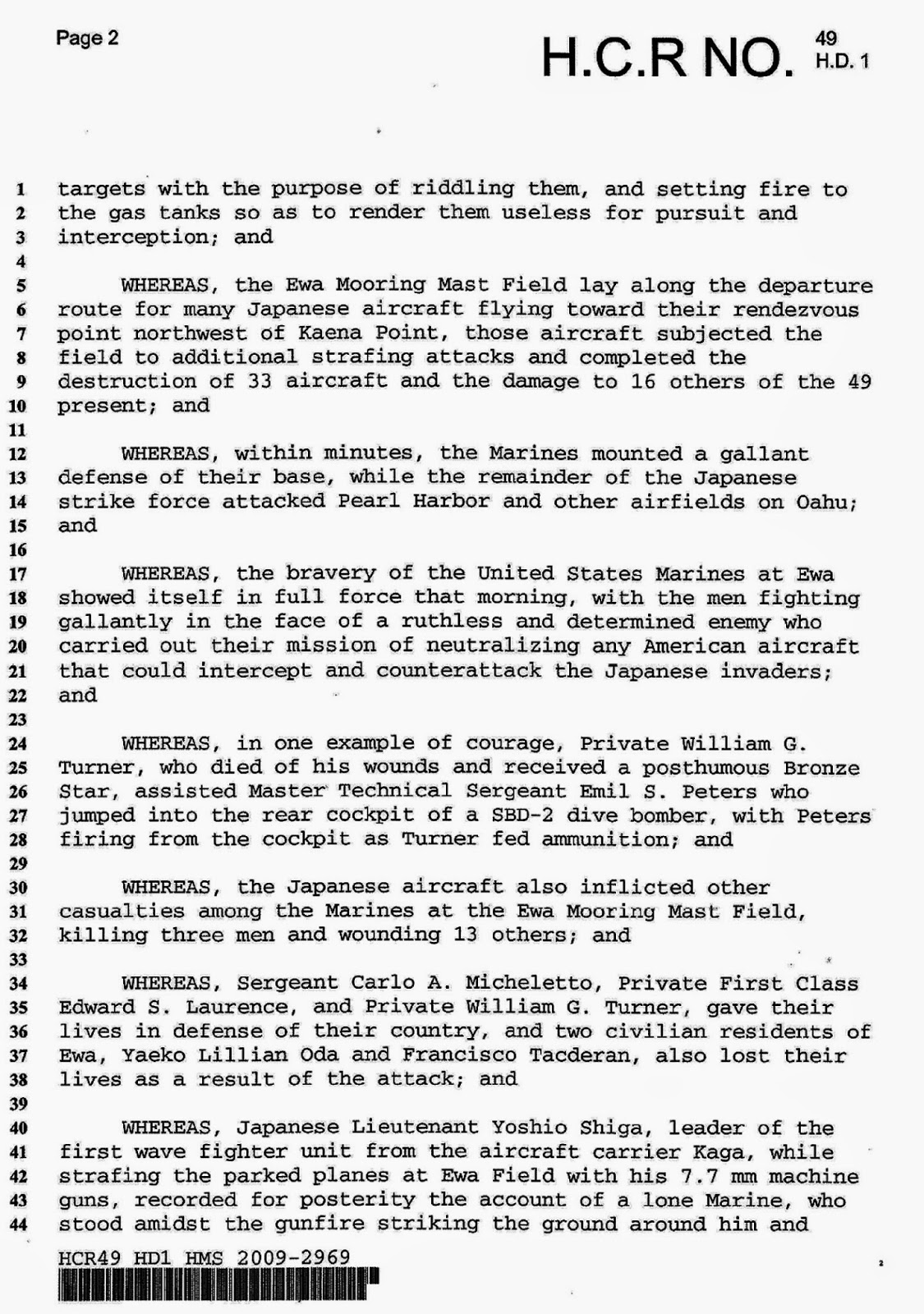 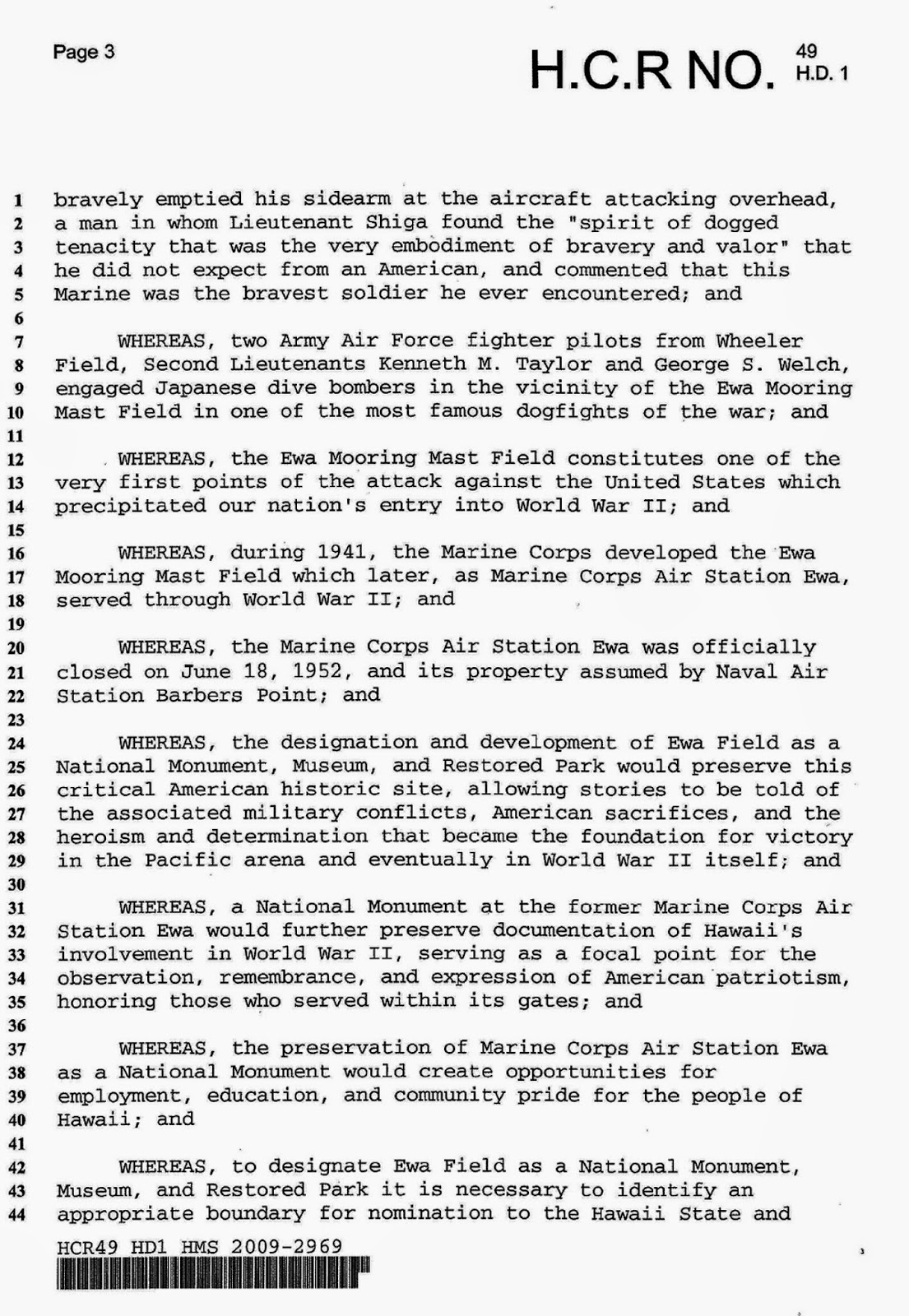 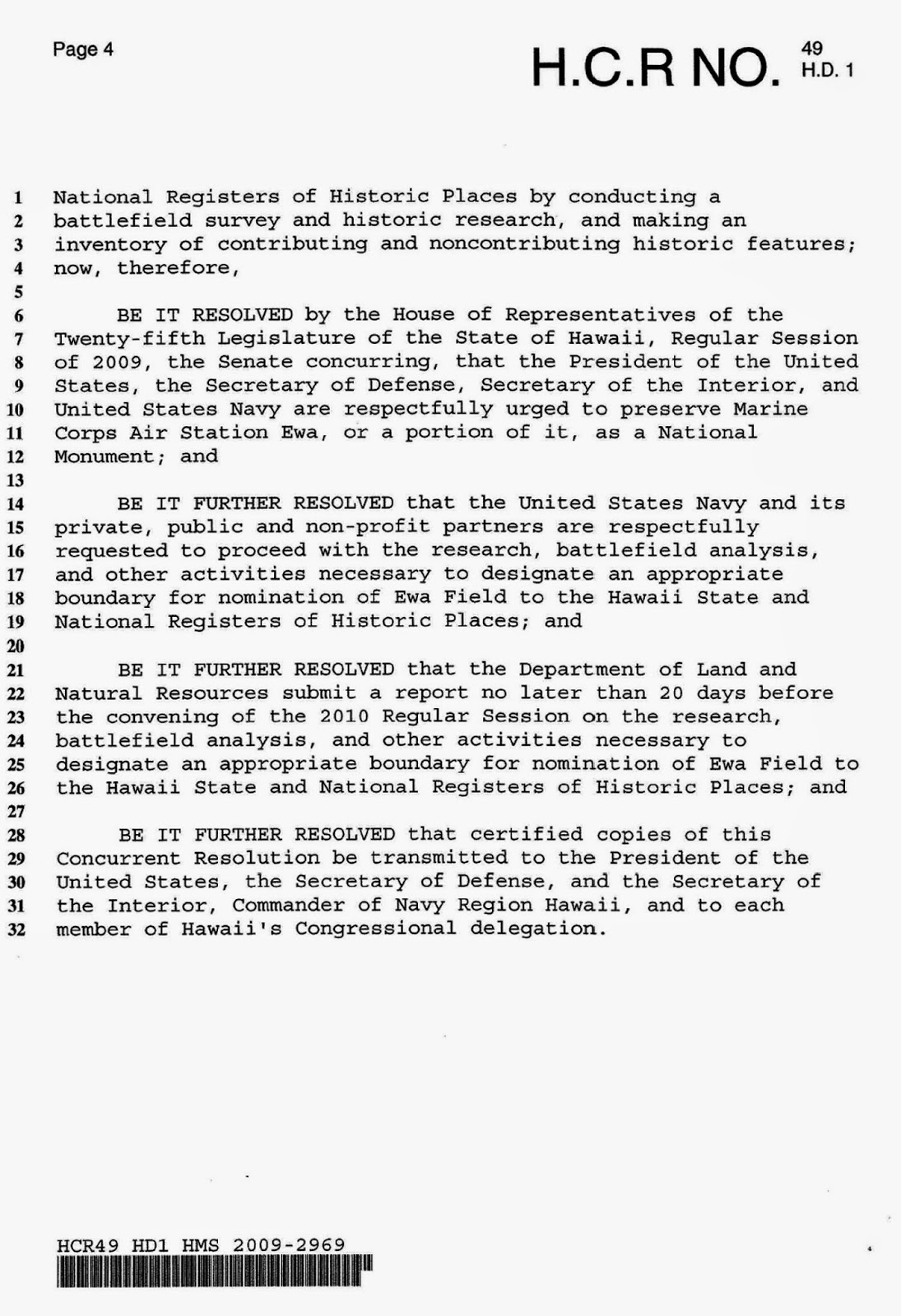 Stars and Stripes: Developers have WWII airfield in their sights

Developers have WWII airfield in their sights 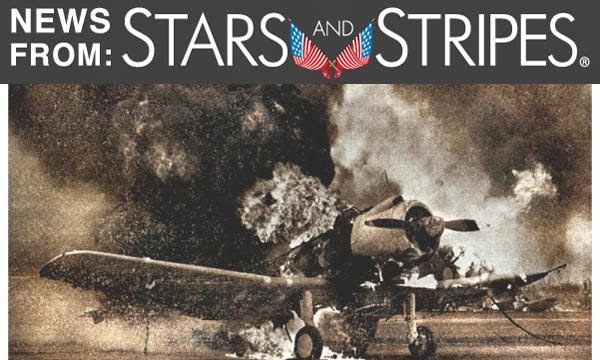 YOKOTA AIR BASE, Japan — During an anniversary ceremony in Hawaii several years ago, retired Marine Maj. John Hughes described the scene of the surprise attack by the Japanese on the island on Dec. 7, 1941.

Then a sergeant, he ordered his men to break out guns and ammo to protect the nearby aircraft when he heard and saw the Japanese Zeros overhead.

“I got off a few rounds, maybe three shots, then started (moving) the planes,” Hughes recalled at the ceremony, according to a Marine Corps account.

“Some planes were on fire, and we moved the other ones to save as many as we could. We’d fire a few shots, go back to pushing planes and then go back to firing.”

But Hughes wasn’t at Pearl Harbor or any of the other well-known military sites attacked that day. He and his comrades were manning Marine Corps Air Station Ewa, one of the first military installations to be hit by the approaching attack force.

“The island of Oahu was a battlefield that morning,” said Daniel A. Martinez, chief historian at WWII Valor in the Pacific National Monument Site - USS Arizona Memorial. “In order to crush the American ability to oppose the attack, the Japanese carefully and skillfully planned an attack to wipe out the airfields. And one of those airfields was Ewa.”

Today, the largely forgotten airfield is covered in weeds with development encroaching on all sides — despite efforts by local activists to secure permanent preservation status for the historic battlefield.

“Only Ewa Field was left off the list,” said John Bond, who has spearheaded a years-long campaign to bring the battlefield the respect and protection he and others believe it deserves.

“We’ve brought this up repeatedly to the Navy and everybody: Why doesn’t Ewa Field get the same honor and recognition that all these other places get legally?”

The local historian claims the field is under attack again — this time by developers.

Earlier this year a Navy-sanctioned 20-acre solar photovoltaic farm was completed near the field, and now the Honolulu City Council is poised to pass a long-term development “guidance plan” that could give a developer the go-ahead to build roads through the heart of the former battlefield, Bond said.

Others don’t see the plan as a threat and say adequate steps are underway to preserve the site.

In a written response to Stars and Stripes, Honolulu City Council member Kymberly Marcos Pine, whose district includes Ewa Village, said, “As a proud granddaughter of a Pearl Harbor survivor and wife of an active duty Navy Officer, I would never support any legislation that would dishonor the memory of our military.”

Martinez said he’s seen a copy of a map showing the projected roads.

“I was quite concerned that the portion of the airfield where the Marines died and where the battle took place was going to be violated with a road going right through it,” Martinez said.

“There is this disturbing reticence of recognizing what is the best thing for Ewa Field that has been going on now for nearly five years,” said Martinez, who described the field as “sacred ground.”

While Martinez’s employer, the U.S. National Park Service, manages most of the military historical sites associated with the Dec. 7 attack, it has only served as an adviser in regard to Ewa Field. The Park Service’s American Battlefield Protection Program last year awarded a $54,000 grant to the local non-profit Ewa Plains Programs, which is intended to “document the extent of the battlefield on and around” Ewa Field, according to the ABPP’s website. The documentation “will lead to greater awareness of the site and aid in future preservation efforts.”

If the property were designated a National Historic Landmark or listed on the National Register of Historic Places, it would fall under the provision of the National Historic Preservation Act, which requires the controlling agency to “minimize harm” to the landmark in any planning or actions, according to the Park Service’s website.

Ewa Field was established as a western guard for Pearl Harbor, which is about 17 miles to the east and was the island’s key defense. Ewa station was still under construction in late 1941, with many of the 800 Marines there still living in tents.

Three “waves” of attack planes passed over Ewa Field while on their way to other targets to the east. The first planes began strafing the almost 50 U.S. aircraft parked there, destroying most of them.
It was the Marine station’s misfortune that it served as a rendezvous point for squadrons of Japanese aircraft that had completed their sorties over other parts of Oahu. As the Japanese pilots circled awaiting the link up, they took the opportunity to unload their unused ammo on the Marines and villagers below.

“They would rotate out here and kept shooting up the place,” said Bond, a military buff who has extensively researched the airfield’s history. “It was the only town in Oahu that was attacked by the Japanese. After two hours they all returned to the ships.”

Four Marines and two civilians, including a 6-year-old girl, were killed in the area that morning, according to Martinez.

One of the most salient features remaining from the historical battle is the bullet-riddled concrete ramp where most of the aircraft were parked.

Most of the 1941-era structures are gone, but about 70 concrete “half-shell” enclosures — formally called revetments and built during World War II to protect aircraft from attack — still stand. Some are used as horse stables.

A long-time Hawaii resident, Bond moved to this part of Oahu in 2007 and soon became fascinated with the neglected Marine air station.

Since then he’s led a series of confrontations over development in the area, including opposition to the original plan for the solar farm that called for its construction on the Ewa runway.

A legislative analyst, Bond has developed skepticism for the “fine print” in development agreements and planning documents that developers can use to skirt restrictions.

That, he claims, is the potential with the long-range plan developed by the Hawaii Community Development Authority and being considered by the city council.

He claims that Hunt Companies, which has leased slightly more than 500 acres from the Navy for development, wants a plan in place that includes hypothetical roads that aren’t projected to be needed until 2035.

“But by putting them into law, it allows Hunt Corporation to put in these roads and further damage the whole area and just claim they have the legal right to do it because it’s city planning law,” Bond said.

Steve Colón, president of Hunt Companies’ Hawaiian development division, told Stars and Stripes in a written response that the company in April had submitted a “comprehensive Strategic Implementation Plan” to the development authority that “complements” current state and city policy in directing future growth of Oahu.

“Roads rights-of-way were conveyed by the Navy to the State of Hawai‘i and the City & County of Honolulu (depending on which specific road is in question) over a decade ago as part of the Navy’s Base Closure and Realignment process,” Colón wrote.

Stars and Stripes submitted questions to Navy Region Hawaii, the entity in charge of leasing the site – and ultimately the party that must seek formal preservation -- asking about the proposed roads and the Navy’s position on preserving Ewa Field.

“For the properties that the Navy maintains jurisdiction over, we will continue to work closely with the State Historic Preservation Division, its Historic Preservation Partners, and the public to ensure compliance under all applicable laws,” wrote Bill Doughty, a spokesperson for Navy Region Hawaii.
The Navy did not respond to questions about potential roads over the airfield or what steps it might take to seek landmark designation.

“To be honest with you,” Martinez said, “I’ve been quite baffled that more people have not stepped up and said, ‘We have to preserve this ground because Americans died there.’”